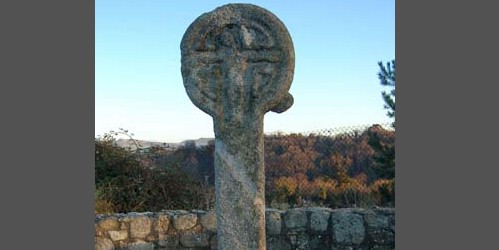 This granite free standing cross 1.40m high with a circular head set in base in the shape of truncated cone. It probably dates between 1150 and 1200 AD and belongs to a small group of crosses in the Dublin/ North Wicklow Area. It has an unpierced ring on the top, with a representation of the Crucifixion scene on one side and two human heads on the other side.

This cross is sometimes called St. Valery’s after the name of nearby house. According to Anne Plumptre, who stayed with the Walker family of St. Valery in 1814 and 1815, the cross was brought from a glen at some distance, and stood originally in the center of a little paddock, round which runs the plantation. But it became so much an object of devotion among neighbourhood, that paths without number were made over the grass to get to it’. This suggest that the cross was moved, possibly from Ballyman, to its present position where it was more accessible to pilgrims.