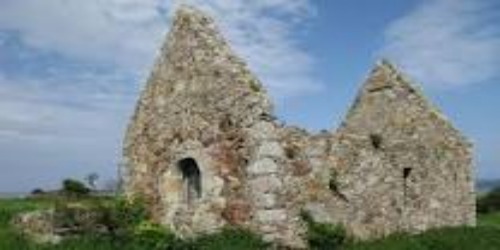 St. Crispin’s cell and surrounding medieval site lie in the townland of Rathdown in the coastal town of Greystones.

The Cell is a small ruined medieval church with a round headed door and flat window lintels. The church appears to have been altered in the 18th Century. Sub surface archaeological investigation in recent years has revealed that the surrounding area was the site of a Norman castle and a medieval village. Evidence shows that human occupation of the site at Rathdown began in the prehistoric era, and lasted until the 1600’s.

Closeby is Captain Tarrant’s Farmhouse and outbuildings dating from the 18th century. The site is unique in that it contains within a relatively small area, evidence of settlement from the full range of historic periods to be found in the county of Wicklow, including prehistoric (Bronze Age 2,500-500 BC), Early Christian (10th Century), Medieval (12th to 16th and 17th Centuries) and Post Medieval (18th Century).