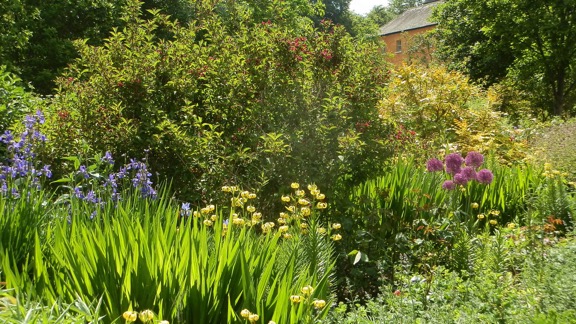 Prospect House, is a charming Georgian house colourwashed in a deep traditional ochre lime finish, set in tree fringed old pastureland. The present 1760′s house incorporates an early 18th century structure built by the Sherlock family and the deed indicate a link with the Earls of Milltown at Russborough.

In 1987 the then dilapidated house was bought by the American artist Timothy Hennessy and his French wife Isabelle. They then restored the house in a flamboyant post-modern style and in place of the Edwardian shrubberies they laid out alleés of lime trees, an elaborate box parterre and two fruit orchards. After Isabelle’s death the house was sold in 1996 to Dermot & Claire Moore who embarked on a thorough restoration of the house with their young family.

Under the supervision of architect David Sheehan, the house was reroofed, refenestrated and returned to its late 18th century appearance. The parkland was replanted and framed by thick shelter belts of hardwoods which are now, 15 years later, making an impact on the landscape. The garden framework, laid out by Hennessy, was filled with herbaceous borders, shrubberies and an extensive kitchen garden.

The tour of the garden starts in front of the house with its magnificent view across the parkland towards the distant Dublin & Wicklow mountains. In Spring, the grass around the house is a mass of snowdrops and naturalised pale blue Anemone apennina. A gravel path leads north east through old granite gate posts to an Edwardian curvilinear greenhouse filled with camellias, jasmine and lilies. Beside it, under the shade of an enormous Irish yew tree is the box parterre which is centred on a rustic summerhouse.

Two lime tree allés lead from the greenhouse to the north and east, both of which terminate with elaborate semi-circular seats from Glin Castle. Between these allées is a crescent shaped herbaceous border filled with perennials gathered over the years from old gardens including Beech Park, St. Catherine’s and Woodville. The east allée leads to a shrubbery laid out by Daphne Shackleton and filled with hydrangeas, while the north allée leads to the fruit and kitchen garden.

Visitors should not miss the courtyard behind the house which has been planted as a formal box and gravel garden with espaliered pear trees against ochre walls. Prospect is a modest garden of some 2 acres, laid out to embellish the old house but also to be productive.

Directions: We are situated 1.5 miles from Straffan, close to Lodge Park (the Guinness garden) and half an hour from the Japanese gardens.