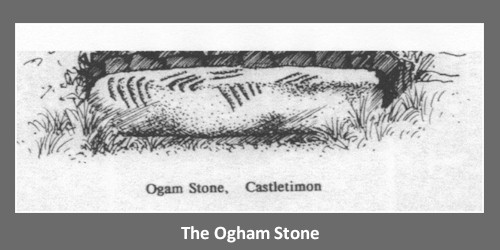 A mile from Brittas Bay beach, the Castletimon Heritage Trail takes you through an archeologically rich area with evidence of habitation since the Bronze Age.

Visible features of historical significance include the Castletimon standing stone, which dates back to 3,500 BC (pre-dates the great pyramid of Giza, Newgrange and Stonehengeand) is one of the newest discoveries on the National Monuments list . You can also see an ogham stone from the 4th century, a 17th century graveyard and the surviving walls of an 18th century mill.

THE STANDING STONE
Sat Nav;- N 52° 54.253’ W 006° 04.137’
Only recently re-discovered in May 2013 this standing stone, a new national monument has been here for approx. 3,500 & may have been covered with brambles for a number of centuries. Local people say that there was originally two stones and one is in a ditch nearby. It is also thought that the missing stone is a “female” & the other a “male” & in the past cattle & horses where passed between them to make them fertile.

THE OGHAM STONE AND THE GIANT
Sat Nav;- N 52° 54.274’ W 006° 04.276’
Local people say that the Ogham stone was once picked up by the Castletimon giant and was thrown down the hill and the scratches on it were left by his finger nails. LEGEND ALSO SAYS….. There once was a man who lived near the Ogham stone who took it from its place to use it as a hob stone. The fairies got so angry he made his cutlery dance and jiggle. After a week of this he got so annoyed he took it back to its original place.Ogham is the oldest form of writing in Ireland & is a mixture of old Irish & Norse. The translation is Neta Cari Neta Cagi which is thought to mean the nephew of Cagi whose land this was. There is only one other Ogham stone in Co. Wicklow.

CASTLETIMON CHURCH
Sat Nav;- N 52° 54.207’ W 006° 04.343’
Castletimon church dates from the 12th century. It was semi-ruined during the reformation & was used for secret catholic worship after this time. The graveyard contains the graves of many of the Byrne family & the oldest headstone that can be read is from 1720. Also buried here is William Duffy who died at 95years in 1741 making his birth date 1646. He would have seen Oliver Cromwell’s army marching through this area.
Castletimon graveyard is of particular note & is well cared for thanks to a local resident. It is a good example of local families’ headstones including the Byrnes & Delahunt’s, one of which was the last to be buried here.Some of the most remarkable headstones from 18th century Ireland were carved by Denis Cullen. Over 120 examples of Cullen’s headstones are known and most of his work is in Co. Wicklow & Castletimon graveyard has a number of good examples. His work spans the late 1750s to about 1790 and he was particularly well known for his figurative carvings of the crucifixion of Christ.
The ruined church here has no designated saint but as part of recent research it has been discovered that there is a St. Kevin’s well in the area which would identify this Church as his. Also the holy water font of this church can be seen outside Brittas Bay Church.
To the side of the church are unmarked grave mounds relating to burials of approx. 50 local residents who died from the worldwide flu pandemic of 1918.

THE OLD MILL
Sat.Nav;- N 52° 54.100 W 006° 04 467
There were three mills on Potters River;- at Barndarriag, Castletimon & Brittas Bay Bridge. They were used by local farmers to grind oats & corn.
The Castletimon/Bornagrew mill was owned originally by the Kent’s family, who also owned Brittas Mill. Records show that in 1854 it was owned by Perrin & Nolan’s of Wicklow town. They were corn & coal merchants & it is in the famine records that they were generous to the poor & starving of the Wicklow area during the famine years.
This side of Potter’s river is the townland of Bornagrew which means the red field & this colour can be seen in the surrounding soils. It is also thought that the river never had a potter along its banks due to the lack of suitable clay in the area but there was a Mathew Potter Esq. in the area in the mid seventeenth century which more probably is the origin.