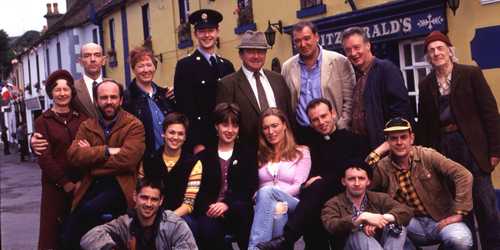 Avoca village was the filmset for Ballykissangel,  a BBC television drama set in a picturesque irish village of the same name. The original story revolved around a young English Roman Catholic priest as he became part of a rural community. It ran for six series, which were first broadcast on BBC One in the United Kingdom from 1996 to 2001. It aired in the Republic of Ireland on RTÉ One and in Australia on ABC TV between 1996 to 2001.

Plot: Father Peter Clifford’s journey from England ends in his new parish, the small Irish town of Ballykissangel. It’s a change from his previous job in the centre of Manchester, but this rural Irish community is hardly the sleepy village he expected…

Locations: The village of Avoca in the beautiful Vale of Avoca was used extensively, especially the Fitzgerald’s Pub, the church, the shops and Garda Station. Other locations in County Wicklow include Ardmore Studios in Bray, Wicklow Town, Wicklow Head, Brittas Bay Beach, Enniskerry, Ballysmuttan Bridge and Glencree. The opening scenes of the first season were shot in Luggala Estate, Roundwood.